This page is in both english

and italian version (with more pictures).

Ah yes, the italian dinner (badly managed) and the Polish one (well managed). After a couple of relaxing days spent at the beach, it was time to explore the area a little more. By walking I reached Sopot, the second of the three cities.

From the Olive hostel could be about 4/5 km, however it is a beautiful walk, beside the beach, there is’ a pedestrian and bicycle path, very nice, you can admire beautiful holiday homes, restaurants, camping sites, all under a fresh vegetation for most of the entire path.

Once in Sopot I was a little disappointed, too touristy and ‘plastic’ location. Even to enter the famous pier you have to pay, I leave it to the tourists this privilege, then I headed to the center, to see the famous house built with the unique ‘drunken’ effect , but again another disappointment here, the trees at the front impede the full view, moreover the signs of the bar and restaurants chains are too invasive. I’ve had enough of Sopot and its ‘high-class’ tourism, with many Germans and Scandinavians, in addition to the rich Polish, coming here. Better my working class favorite beach.

The whole way there by the seashore is a nice walk. For lunch I decided to try the famous ‘milk bar’ Kmar, located a few hundred meters from the Olive hostel where I am staying. I knew that the only spoken language there was Polish, however I was counting on my previous experiences in many other bar mlekzny, so I got in, stay in line, take my tray and wait to order what I know. When the lady came to serve me I replied what I familiar within the Polish food specialties, unfortunately, to my surprise, the lady told me something, in Polish, I did not expect that our conversation would continue, just guessing I made a wrong order, I tried to change it, but the lady insisted to tell me something, pointing to the end the row. Fortunately, a young Polish man came to soccur me, explaining, in English, that I could order at pay desk, she was there to take only orders for soups. Good to know! Once paid I had to wait for the food to get ready and announced, to tell the truth, it took a way too much time, I was not the only one to wait for a long time. Anyway, I always recommend the milk bar, they are good and super cheap, but having someone who speaks Polish is almost necessary.

Once in the hostel I met a guy, newer, just arrived, he told me his sad adventure on the overnight train from Wroclaw, while he was sleeping, someone stole his backpack with laptop and money. He came to Gdansk to work as a lighting technician, for concerts, events and evenings, as the Baltic coast in summer has a lot to offer. I decide to invite him to drink a beer in the evening. Let’s go to Gdansk! He leads me, first to see a small hill behind the town, from where you can see all the city and the night lights.

Then we went to a pub owned by a friend of him, where you can find great beers, not the usual commercial ones. The Palupka. In the same street where this pub is located, there are different bars, in one a band was playing jazz, so we took a sit outside, on the sidewalk, listening to nice music and get to know with a Polish guy who had the same idea, we started to exchange travel considerations about the cities we had seen and so on, sharing experiences. Always nice to meet someone who loves to travel.

After a couple of beers, I decided to return to the hostel, the next day I want to go for a little hike and I have to wake up early. The usual suburban train is always on duty, even at night, the tickets can be bought from the conductor, at the head coach of the train. My partner prefers to stay outside, I saw him again the next morning, getting back, completely drunk and with a disgusting stain on the back of the pants, but you know, the Poles drink a lot …

For me it is time to see the cathedral in Oliwa district, at short walking distance from the hostel, inside it has one of the biggest pipe organs in Poland and Europe.

The cathedral is located in a beautiful park, too bad it has to be the day of sh.t, because while I was walking among the trees I felt something on my shoulder.

Yes, one of the many pigeons decided to leave me a memory of its existance … 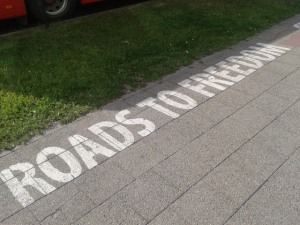 In the afternoon I meet a girl in Gdansk, contacted through couchsurfing site, Karolina, it makes me see the place where he lives, but lately has lived on the road, working on a cruise ship.

We had a nice time, telling ourselves something about our lifes and we spend a lovely afternoon, we sawe the area where solidarnosc and the protests against the Communist regime began, with Lech Walesa had his speech to the Polish workers and started his political career.

The Road of FREEDOM is an important sight of Gdansk, here all started.

We ended the evening in a quiet cafe, where we had a delicious apple pie. Later I continued to visit Gdansk, fascinated by the colors, the people around me, the bank of the river Motlawa, cobbled streets, beautiful palaces and the impressive Mariacka, the street with the amber shops.

The next day I went to Hel! No, I’m not swearing, Hel is the name of a small village at the end of a strip of land a few kilometers from Gdansk, a narrow peninsula.

I went there by train, it is perfect for a day trip. From Gdansk to Gdynia, the third of the town, there you catch a regional (ICs costs too much and the journey takes only about ten minutes less), return ticket is less than 10 €.

The train is full of people that go on vacation on this peninsula, it was raining and the view was not the best, but I could appreciate the journey, on the one side, the right, I could see the baltic sea, while on the left one a beautiful pine forest and then you can see the other side of the sea, all will be two hundred metres wide, unique and evocative as a place.

In HEL to the rain becomes more intense, I had time to visit the beach where they put a focarium, few stands for selling souvenirs and such, the marina, the port and the city centre, I liked the cosy houses, very typical. In one of them, turned into a restaurant, I stopped by to eat something warm and have a shelter from the infamous time. I’ve got the train back in a couple of hours, desist from doing any coast to coast hiking, it rain ‘cats and dogs’, too much for me and sometime I prefer to leave behind some outstanding experience, those are good excuses to return somewhere.

The train fills up quickly, the rain has advised many to end the visit. I still have a day to spend on the baltic sea, unfortunately the rain but the company seems to want me to do on Sunday afternoon, the sky opens up and gives way to a bright sun, I decided to go at the beach to spend the last hours of this beautiful tour in northern Poland . I think I will return here. The next morning I get back on the road, towards … 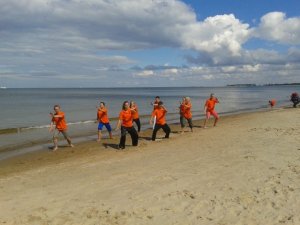 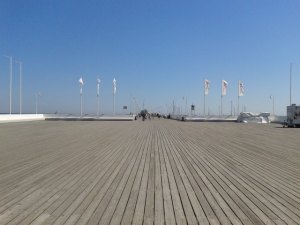 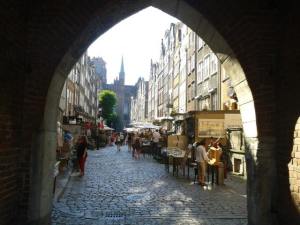 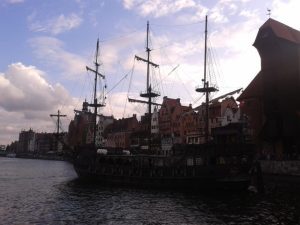